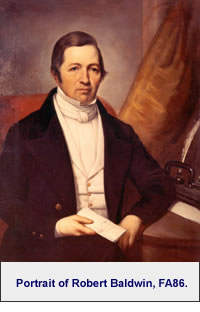 Happy Birthday to Robert Baldwin, drafter of The Baldwin Act!

An Act to provide, by one general law, for the erection of Municipal Corporations, and the establishment of Regulations of Police, in and for the several Counties, Cities, Towns, Townships and Villages in Upper-Canada, also referred to as the Municipal Corporations Act, 1849, a.k.a. the Baldwin Act, was Ontario’s first municipal statute. It was named after Robert Baldwin (1804-1858), who was co-premier and Attorney General at the time and at various other times lawyer and Law Society of Ontario Treasurer. The act was passed in 1849, came into force on January 1, 1850, and was described in The Municipal Manual, 11th ed, as “the Magna Charta of municipal government in Canada” (p 8).

The citation for the act is 12 Vict c 81, and it’s available electronically in the Great Library; if you need a copy, just ask.